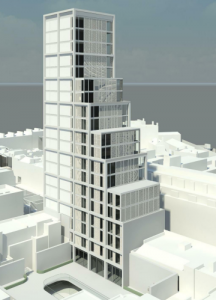 Following a successful planning application by Canfield Ltd for a six storey student accommodation block in WC1, HS2 completed a compulsory purchase of the site in December 2017. They then attempted to minimise the compensation costs by suggesting the site was never viable for a six story building due to the presence of the Northern and Victoria lines running directly below. Furthermore they argued that the construction programme and costs of the building would diminish any additional value achieved by the student accommodation.

Canfield called us to ask how and what could be built without affecting the tunnels whilst considering costs.

Using our in-depth knowledge of construction logistics and our extensive basement expertise, we were able to provide viable foundation options, with ground movement assessments, which demonstrated not only could the consented scheme be built within acceptable movement tolerances of the Victoria and Northern lines, but also that the site could accommodate a taller tower without passing the stringent limits set by Transport for London.

We did this by presenting 5 key solutions:

Canfield Limited commented, “Ash and the Symmetrys’ team did an excellent job assisting us under on a complex scheme with an unusual job remit proving the viability of the development in the Upper Tribunal. They were extremely responsive and provided both thorough and practical solutions to the problems presented.”

We are delighted that Symmetrys was instrumental in the client obtaining a fair compensation for the site, awarded in May 2020.

Interested in finding out about more projects like this? Symmetrys were asked to use their expert knowledge to aid a coalition of residents in East London who were fighting to stop the demolition of their homes. To read more on how Symmetrys solved this issue, click here.